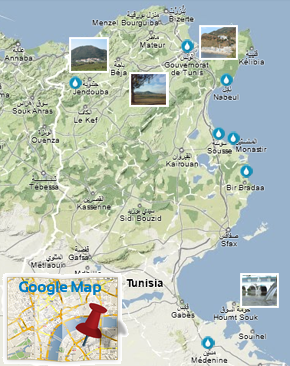 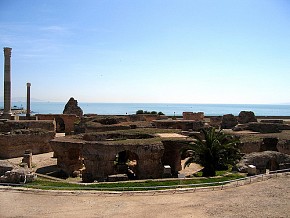 Hydrotherapy is the therapeutic use of water in all forms and ways. It has been know for millennia by the Egyptians, the Greeks and the Romans.

Hydrotherapy is the external use of water for therapeutic purposes, irrespective of its type (sea, spring, mineral, or even tap water), in its liquid and gaseous form, and at variable temperatures. This includes baths, showers, jets, compresses, etc.

According to the water used for care, we distinguish three main specialties: thalassotherapy, thermal cures and balneotherapy or SPA.

This is care by thermal water, which is a hot underground water loaded with minerals and trace minerals. Balneotherapy consists in bathing the whole body or one of its parts, generally in water, but also in mud, sand, air and sun. In addition to complete baths, we recognise in particular sitz baths and foot baths.

Thermal care or cure is a time-honoured tradition in Tunisia. Our ancestors have already understood its health benefits and today's scientists and practitioners started working to confirm such convictions. Some studies have proved the beneficial effect of thermal water on knee arthritis, back pain, fibromyalgia or psoriasis....

A thermal cure, irrespective of the problem to solve, generally lasts 18 days.

What is thermal water?

Thermal water as used in a thermal establishment emerges from a spring or an on-site borehole (without transport). This 'natural' water is generally loaded with minerals, but in variable compositions according to geographical location. Absorbed by the skin when the bath water is at the body temperature, those minerals contribute to the benefits of thermal cures.

Thalassotherapy is, therefore, the therapeutic use of seawater, but also the other elements in the marine environment: mud, algae, air and climate.

What is a SPA?

A SPA is a wellness and cosmetology establishment where freshwater hydrotherapy is generally practiced. SPA stands for Salus Per Aquam (health by water), usually engraved on Roman bath walls, sometimes in the form of the SPA acronym.

Do we use other products in hydrotherapy?

Aromatherapy and herb products are usually combined with hydrotherapy by adding essential oils or medical plant extracts in the treatment water.

What can have a beneficial effect on the curist at a spa is probably the holiday atmosphere away from home, the work break, the healthier food, the exercise and the air quality at the centres located near the sea or in the mountains.

How do these waters impact health?

Water has two characteristics that are taken advantage of in rehabilitation exercises: The uniform resistance that its mass opposes to movement and the relative weightlessness of a body immersed in it. It also has four properties that are very useful in hydrotherapy:

As for minerals, some of which are indispensable to health (calcium, potassium, magnesium, iodine, etc), they produce beneficial effects by penetrating in the blood during treatment. The therapeutic orientations of different thermal institutes depend on the mineral composition of the water they have access to.

Finally, let's not forget that many types of massages can be practiced under water sprays. They can be soothing and relaxing or stimulating.